Differential hardening consists of either two methods. It can involve heating the metal evenly to a red-hot temperature and then cooling it at different rates, turning part of the object into very hard martensite while the rest cools slower and becomes softer pearlite. It may also consist of heating only a part of the object very quickly to red-hot and then rapidly cooling (quenching), turning only part of it into hard martensite but leaving the rest unchanged.
Conversely, differential tempering methods consist of heating the object evenly to red-hot and then quenching the entire object, turning the whole thing into martensite. The object is then heated to a much lower temperature to soften it (tempering), but is only heated in a localized area, softening only a part of it.

The go-to source for differentially heat treatment.
Once the steel is shaped as much as possible in its softer state, it is coated with a thin layer of clay along the edge and a thicker layer on the body and spine. During the hardening process, the split second difference in cooling time caused by the clay layer creates two different hardness areas in the same piece of steel. The edge cools faster and forms a very hard steel structure called martensite while the body cools slower and forms a very tough steel structure made of ferrite and pearlite. The boundary between these two areas is called hamon and is commonly seen as a frosted wavy line down the length of a polished sword blade.
When the clay is fully dry, a charcoal fire is used to heat the steel slowly and evenly, taking care not to overheat any part of it. First the spine is heated to bring the whole blade to just below temperature, and then it is flipped over to focus heat on the edge. When the entire edge is at the correct temperature, it is plunged into a hot water bath, edge down, and held until cool (yaki-ire). The hardness is checked with a file and the process repeated if necessary. After hardening, the clay is removed and the steel is heated slightly again to remove some of the internal stresses (yaki-modoshi). Once this process is finished, and if the steel survives, the blade is ready for Togi, hand polishing.

Preparing the Clay Mixture
The clay mixture does not need to have secret or exotic ingredients, but there are a few properties that are desirable in the final blend. The basic recipe is approximately a 1:1:1 ratio of regular clay, ground stone/sand, and charcoal powder. The clay provides the stickiness to keep it together and on the blade, the stone/sand prevents shrinking while drying, and the charcoal helps prevent flaking off in the fire due to heat expansion. The soft water source is snow that never touched the ground (where possible). Each ingredient is ground in small batches between stone and steel or two stones. Grinding and screening the ingredients as finely as possible is important, especially for the slip layer, as the layer can only be as thin as the largest sized particle.

Applying the Clay (Tsuchioki)
A thin layer of clay slip that is higher in charcoal content is applied to the blade first, the charcoal burns out in the fire and the resulting porous clay surface has been found to cool steel faster than if it was bare. The clay slip also helps prevent oxidation and decarburization (loss of carbon at the surface) while in the fire. When this layer is dry, the body and spine are coated in a thicker layer of clay that will prevent the steel from cooling too quickly in these areas.

Yaki Ire
This is the moment of truth for the knife, if it survives intensity of the quenching process it will become a live blade. If it succumbs to the stress and cracks it will become a piece of scrap steel again. Yaki-ire requires intense and singular concentration and even the best smiths lose one out of every four or five sword blades to the process. Even though all the work up to this point may be lost, the bene-fits far outweigh the risks when a good blade has been born.
In order to provide visual consistency for judging color and temperature, yaki-ire is done at night time or with doors closed and lights off. A charcoal fire is built and the water heated up almost to boiling and then set near the forge. Not heating too quickly or too slowly, the blade is brought up to its critical temperature and committed to the water with a prayer.

Yaki Ire Performance Testing
Though there is great risk of losing a blade to the traditional water and clay tempering process, the gains in performance are great. Rather than finding a mid point that is an appropriate compromise for a particular blade and steel, clay tempering allows for the best of both worlds in a single blade. If the whole blade were as hard as the edge, it would be too brittle for most uses, and if the whole blade were as tough as the body, the edge would be too soft for most uses. 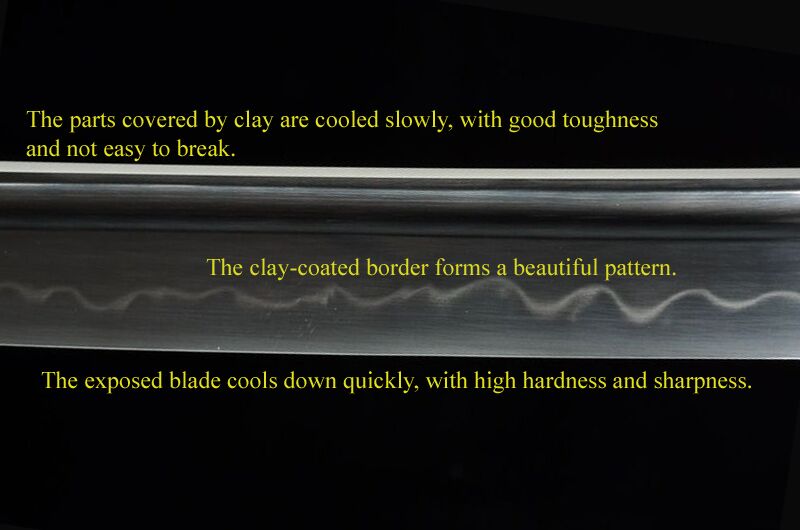