Learn More About The NINJA

You’ve seen the flashy moves on TV, and you’ve probably tried a few of them at home, but do you really know all the training and equipment that expert ninjas go through and use during their endeavors? We’ve broken it down for you below so that next time you catch a familiar looking character on TV, you’ll be able to point out to your friends the ‘yumi’ that they’re about to use to piece the enemies heart. 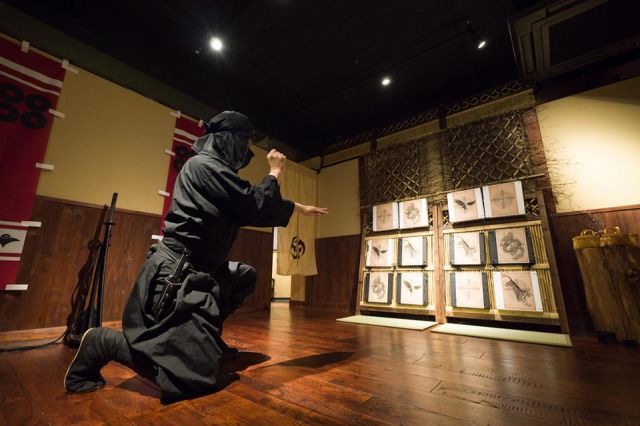 Ninjutsu is the modern-day term to describe the skills and techniques required to be a ninja. When official training began for ninjas, it involved a variety of espionage and survival skills which began when they were still in their childhood. Martial arts was a given during all ninja training, and survival and scouting skills were equally as important. Classes were dedicated to understanding the difference and importance of poisons and explosives, and endurance and strength training were also given priority. As part and parcel of the role, many ninjas also had to learn about different common professions in order to slip into their disguises persuasively.

During training, the following popular techniques were practiced and used widely:
•Hitsuke: the practice of lighting a fire to distract guards away from the planned point of entrance of a ninja into a castle or camp
•Tanuki-gakure: climbing a tree and camouflaging oneself as vegetation
•Ukigusa-gakure: maneuvering duckweed over water to hide underwater movement.
•Uzura-gakure: curling into a ball and remaining motionless in order to appear like stone.

There are an abundant of equipments and tools that ninjas use to achieve their goals, most of them quite dangerous and require lots of practice and training to be able to execute as quickly and stealthily as possible in high-danger situations.

Below is a list of a few that you’ll find quite interesting to know (and might find quite familiar from all the moves and animes you’ve seen!):
•Shinobi Shozoku – the black suit in which ninjas are often portrayed in graphics and movies (however, according to many sources, ninjas were more likely dressed as civilians, and the black dress costume came about when they were being drawn and the artists seemed to think that black portrayed their ‘invisibility’).
•Kusari Katabira – this is the term describing the chain armour top that ninjas wear underneath the black suit (or their outer layer wear) to protect themselves against swords or flying daggers. The chain material is meant to stop the blade from piercing onto the skin.
•Yumi – the bow ninjas used.
•Bo-hiya – the fire-arrows ninjas used (they were ignited by lighting a fuse made from incendiary waterproof rope, wrapped around a shaft).
•Shuriken – the blades that ninjas threw (could have multiple spike points).
•Tetsubishi – similar to shuriken, but usually with only three spike points.
•Kusarigama – a sickle and chain weapon.
•Katana – special Ninja sword.
•Tekagi – hooks used by ninjas to scale walls and other surfaces.
•Tekko-kagi – Claws used for fighting through the form of scratching. 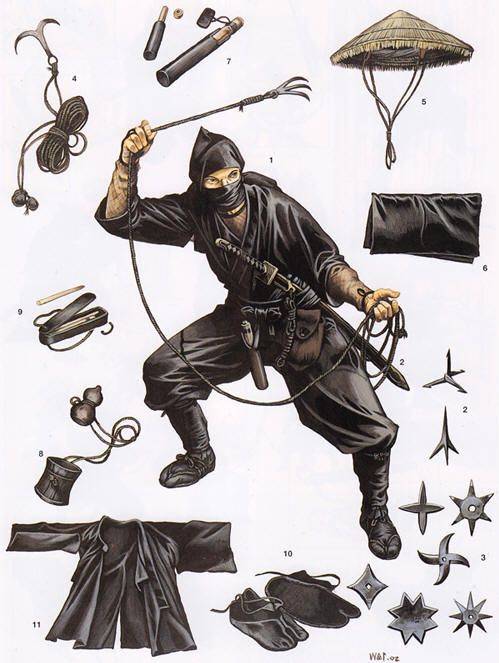