If you collect katanas long enough you're eventually going to hear of him. One of the most famous and revered swordsman who ever lived, Miyamoto Musashi has inspired countless martial artists for centuries through his writings and the legends that surround his life. You've probably heard the name before now, whether referenced as a historical figure or as a character in one of the dozens of films, manga, and video games he is featured in. In addition, there are multiple katanas produced every year that have his name attached to them - he is a revered individual in the sword community. But how much do you actually know about him?

Born in 1584, Miyamoto Musashi was the son of Shinmen Munisai, also known as Shinmen Takezō, Miyamoto Bennosuke or, by his Buddhist name, Niten Dōraku, was a Japanese swordsman, philosopher, strategist, writer and rōnin. From a very young age Miyamoto Musashi became fixated on mastering the sword. He trained hard and fought numerous duels beginning at the age of thirteen - according to some, he fought over sixty duels without being defeated. 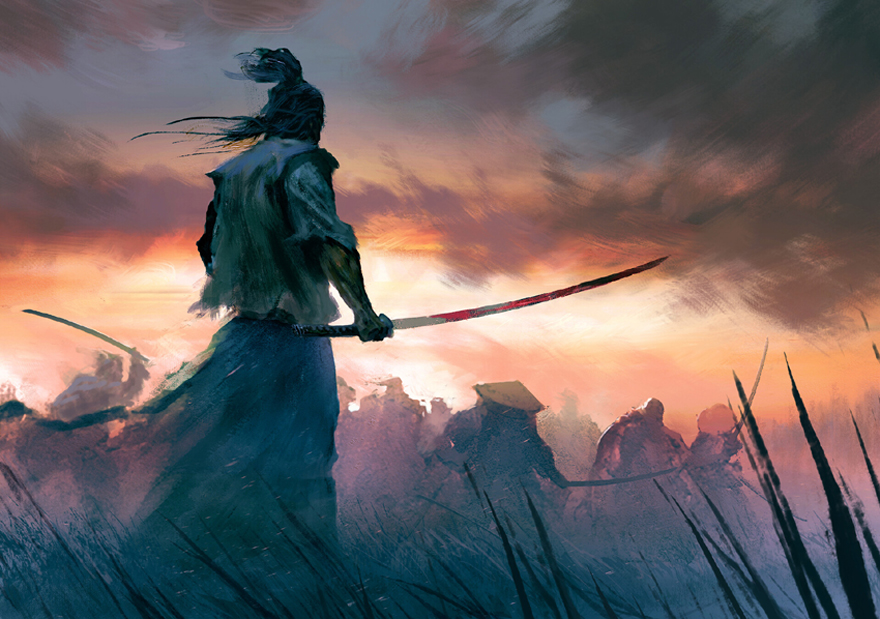 In many of these duels he eschewed using a katana, instead preferring to defeat his opponent with a wooden bokken to show his mastery of combat. He was known also for mastering combat using a katana and wakizashi at the same time, a two-handed style he dubbed "Ni-Ten Ichi Ryu", or "The School of the Strategy of Two Heavens as One".

Sasaki Kojiro engages Miyamoto Musashi on the shores of Ganryū Island.
In 1611, Musashi began practicing zazen at the Myōshin-ji temple, where he met Nagaoka Sado, vassal to Hosokawa Tadaoki; Tadaoki was a powerful lord who had received the Kumamoto Domain in west-central Kyūshū after the Battle of Sekigahara. Munisai had moved to northern Kyūshū and became Tadaoki's teacher, leading to the possibility that Munisai introduced Musashi to Sasaki Kojirō, another guest of the Hosokawa clan at the time. Somehow, a duel was proposed between the two; in some versions, Nagaoka proposed the duel, in others with Kojirō proposed it out of rivalry or jealously. Tokitsu believes that the duel was politically motivated, as a matter of consolidating Tadaoki's control over his fief.

The duel was scheduled for April 13, 1612, when Musashi was approximately 30 years old. The departure by boat for the duel was arranged for the Hour of the Dragon in the early morning (approximately 8:00 AM) to the island of Ganryūjima, a small isle between Honshū and Kyūshū. While Hosokawa officials banned spectators, the island was filled with them anyway. Kojirō was known for wielding an oversized nodachi (Japanese greatsword) called a "laundry-drying pole" for its length, as well as being titled "three-shaku silver blade" (「三尺の白刃」). Using this sword, Kojirō was said to be known for a swift two-stroke sword technique called tsubame gaeshi, and he bore the nickname "The Demon of the Western Provinces". Kojirō arrived at the appointed time, but was then left to wait for hours; Musashi had overslept. In some variants of the tale, Musashi intentionally arrives late as a sign of disrespect. As he sailed over the Kanmon Straits, Musashi carved a crude oversized bokken from one of the ship's oars with his knife, making an improvised wooden sword, possibly to help wake himself up. Upon his arrival, an irritated Kojirō chided Musashi's lateness and dramatically threw his scabbard into the sea, as a sign that he would not stop and would fight to the death. Musashi responded with a taunt of his own, saying that Kojirō clearly wasn't confident in himself if he thought he'd never get a chance to use a fine scabbard again.

Statue on Ganryu Island depicting the duel between Miyamoto Musashi and Sasaki Kojiro
The two circled each other, and Kojirō leaped toward Musashi with his trademark overhead strike. Musashi, too, jumped and swung his weapon with a shout, and the two sword strokes met. Musashi's headband fell off, sliced by Kojirō's sword, but somehow, only the headband was cut rather than Musashi's skull. Musashi's strike, meanwhile, had struck true, crushing Kojirō's skull.


Most of what we know about Musashi came from his writings. Unfortunately, little is known about his life except his training, duels, and philosophy of swordfighting as these were the only subjects he wrote about with any detail. Thankfully, his writings in this area were of high quality, and nowhere is this more evident than in his penultimate work, "Go Rin No Sho" - translated into English as "The Book of Five Rings" which will be introduced in next post.